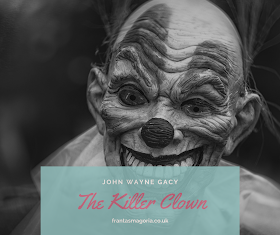 John Wayne Gacy AKA Pogo the Clown was an American serial killer and rapist that killed 33 teenage boys and young men in Illinois during the '70s.

Today we are going to look at his childhood, relationships, and the crimes he went o to commit later in life.

John Wayne Gacy was born on the 17th of March 1942 in Chicago. He had two sisters, Joanne was the older sister, and Karen was the youngest of the family. His mother was called Marion Elaine Robinson and his father John Stanley Gacy, and they were of Polish and Danish descent.

He and his siblings were subjected to regular beatings from their alcoholic and violent father whenever they did something wrong. As the only boy, Gacy was bullied by his father and when his mother protected him he would be called a sissy.

As a child, Gacy was bullied at school because he couldn't play due to a heart condition and he suffered from seizures. This made him feel alienated further and when he was molested at 9 years old he was too scared of his father's reaction he never told him.

His Career and Relationships

After he had an argument with his father he fled to Vegas and worked in a Mortuary for a few months. It did not last long when he was caught sleeping in the embalming room with the corpses. He even admitted that he had slept underneath the body of a young boy whose cause of death had aroused him.

Gacy studied at business college and graduated in 1964. He became a manager at a fast-food chain in the '60s, but he was reportedly molesting male employees and getting them drunk in his basement. He then went on to become a building contractor in the '70s and used this as another way to get close to young men.

Regardless of this, he was still respected and well-liked in the community. However, his relationships with his wives did not go well. He got married and divorced twice, and was the father to 2 children.

He would cheat on his first wife, attend swinging parties, take drugs and use pornography. During his second marriage, he came out as bisexual and started bringing young boys back to their garage and using gay pornography.

Gacy joined a clown club in Chicago called The Jolly Joker and began performing at children's parties. He would organise parties for the neighbourhood and dress up as Pogo the Clown to entertain the kids.

When he was performing he used the names Pogo the Clown or Patches the Clown. He painted his face white, his mouth red and his eyes blue. He wore a hat with colourful pom poms with his red and white suit.

He would also dress as his clown alter egos when he committed some of his crimes. Guests at his parties could smell something strange at his home, but they never suspected it was caused by anything sinister.

He lured his victims in with offers of construction jobs and captured them. Once he had them where he wanted them he would torture and kill them. His usual method of killing his victims was strangulation.

Gacy was first charged and convicted for sexually assaulting 2 boys and received a sentence of 10 years. However, he was released on parole after only 2 years in the Summer of 1970.

He was arrested for the assault of another boy a year later, but this time the charges were dropped as the boy failed to appear for the trial.

By the mid-'70s he would be accused several times of rape and be questioned by the police over disappearances in the area. He later went on to call these years his 'cruising years', as this was when he committed most of his crimes.

His downfall began in December 1978 when a boy called Robert Piest went missing, and the police were told he was last seen going to see Gacy about a construction job.

The police searched his home and discovered evidence of murder. They also found bodies hidden in the crawl space under his house and in trenches.

Gacy confessed to approximately 30 murders. His first murder was of a boy called Timothy McCoy in 1972. He offered McCoy a bed for the night and paid him for sex, but the following morning when McCoy woke him up he thought he was trying to kill him. He stabbed McCoy in the chest repeatedly and hid him in the crawl space.

25 victims were identified and their names are listed below. Unfortunately, 8 of the bodies could not be identified due to the level of decomposition.

His trial started on the 6th of February 1980, and he had already confessed to committing the crimes. However, the trial focused mainly on whether or not Gacy was insane when he committed them.

Gacy said the murders were committed by an alternate personality of his and mental health specialists testified for both sides of the insanity argument.

He was held at Menard Correctional Centre for a decade and a half, and he claimed he was innocent even though he had already confessed.

John Wayne Gacy was executed by lethal injection on May 10th 1994 at Stateville Correctional Centre.

While he was in prison he started to paint and a few of them were auctioned off and made up to £4000. Many of his paintings were of his alter ego Pogo the Clown.

I think most people have heard of John Wayne Gacy and/or Pogo the Clown. He has probably been the biggest inspiration for most horror clowns, such as IT and Twisty the Clown in American Horror Story.

Now, clowns do not scare me very much (except the weird clown ornaments), but what John Wayne Gacy did was and still is horrifying. The fact he used his jobs as a way to lure young men into his traps is disgusting, and the fact he got away with it for so long is shocking!

With his previous conviction, you would think the police would speak to him a lot sooner than they did when boys started to go missing. Especially when the parents of the missing children told the police to do so. So frustrating!

What are your thoughts on John Wayne Gacy and the crimes he committed? Let me know in the comments.
Share